Starting with a volumetric dataset from the MR VIEWER base module, IMAGE PROCESSOR tools support segmentation, boundary mesh generation, and cortical unfolding. The output may be made available to VISUALIZER for 3D rendering, or to SOURCE ESTIMATOR for realistic headshape modeling and cortical surface restriction. 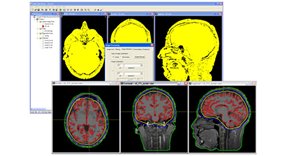