Do BioSemi active electrodes have a slew-rate problem?

It was brought to our attention that a rumor is buzzing around among EEG researchers that there may be an inherent noise problem with active electrodes. The source of this rumor is a paper published by Sarah Laszlo et al. in 2014, see https://docksci.com/a-direct-comparison-of-active-and-passive-amplification-electrodes-in-the-same-a_5aa0d4a8d64ab26eb17f2006.html . In this paper, the authors compare the performance of one particular brand (not BioSemi) active electrodes with passive electrodes, both connected to a conventional EEG amplifier (also not BioSemi). Both active and passive electrodes setups were tested with low (2 kOhm) and high (50 kOhm) electrode-to-skin impedances.

So far so good. The paper starts to derail when the authors attempt to explain why in the tests with high skin-to-electrode impedances, the number of sweeps required for reliable ERP is similar for active and passive setups, instead of a lower number of sweeps for the active case as they would expect on the basis of the better total noise results. So although the active electrodes do not perform any worse than passive electrodes, they basically wonder why the performance is not better than it is. The relevant paragraph is printed below: 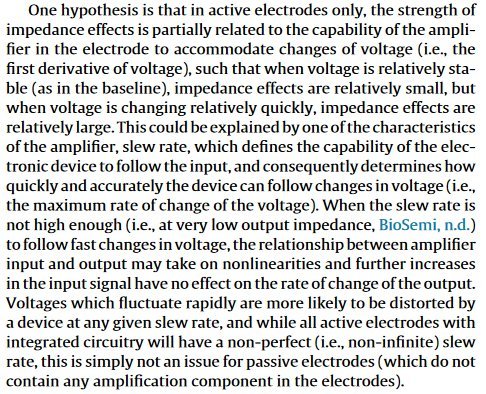 A logical first step in analyzing the above discrepancy would have been to analyze the noise spectra (for example a relatively small band of extra noise with frequencies around the ERP waveform would explain that the total noise number is hardly influenced whereas the number of required sweeps would certainly be affected). Instead, the authors choose to introduce a hypothesis without any support by measurements or references. The authors suggest that the amplifier in the used active electrodes has a slew rate that is limited to such an extend that it causes distortion of the ERP wave, leading to a higher required number of sweeps than would be expected on the basis of the total noise figures.

How extreme the hypothesis actually is, can be illustrated by some numbers. The paper shows ERP results with a bandwidth of 250 Hz and an amplitude of 6 uV. The required slew rate to acquire this waveform without distortion is approx. 0.01 V/s (min SR = 2*pi*f*Vpk-pk, see for example https://en.wikipedia.org/wiki/Slew_rate). Now consider the standard BioSemi ActiveTwo EEG system with active electrodes. At 16 kHz sample rate, this system can acquire a 3 kHz, 0.5 Vpk-pk wave without significant distortion. The complete system (active electrodes, post amplifier, analog-to-digital converter) therefore has a slew rate of at least 10,000 V/s (or 0.01 V/us in the more usual notation). The standard BioSemi active electrodes are also applied in a high frequency version of the ActiveTwo system with 262 kHz sample rate. The setup accurately acquires a maximal sine wave of 80 kHz, 0.5 Vpk-pk, leading to a slew rate estimate for the standard BioSemi active electrodes of at least 0.2 V/us. This is a factor of 20 million faster than in the Laszlo hypothesis. Refer to the following result for a 20 kHz, 40 mVpk-pk input signal acquired with standard BioSemi electrodes and a 262 kHz sample rate version of the ActiveTwo system (the dots indicate sample points at 3.8 us intervals). Note the fast rise and fall times of the square wave edges indicating good slew rate performance (the plot shows rise/fall times of approx 10 us, this is a limitation for step responses of the decimation filter in the ADC).

Designers of EEG systems, with or without active electrodes, all make use of a relatively small pool of quite similar Op-amps (building blocks for amplifier circuits) and ADCs provided by a handful of semiconductor manufacturers. These components all offer slew rates far beyond what is minimally required for EEG signals. I am therefore quite sure that our competitors can present results similar as found for the BioSemi setup. This is supported by the input range and bandwidth figures published by various manufacturers. While I would not hesitate to spread doubts about performance aspects of products by BioSemi’s competitors, the limited slew rate argument is so unlikely for any currently available EEG system (with or without active electrodes) that I would never consider using it.

In other words: it is doubtful that the particular (non BioSemi) active electrode evaluated in the paper has a slew rate with a factor of 20 million slower than the BioSemi active electrode. Anyway, such an extremely slow slew rate would have been immediately apparent in the waveforms generated by relative large and fast artifacts in the EEG signal, such as eyeblinks. In addition, the phenomenon would have been straight forward to measure by connecting the active electrodes to a signal generator. The paper does not indicate that any attempt was made to verify the hypothesis with measurements. Given that the particular active electrodes as tested in the paper are quite widespread under EEG researchers, it is hard to imagine that a slew rate limitation of 0.01 V/s would have remained unnoticed for years among these researchers.

The authors make things worse by stating that slew rate limitations are more severe for amplifiers “at very low output impedance”. They even refer to BioSemi to support this claim. In reality, BioSemi never has made such a statement and with good reason: it simply is not true. There are numerous amplifier designs with high slew rate and low output impedance, the BioSemi active electrode as presented above being just an example.

To summarize: the paper presents an unlikely hypothesis that is not verified and not supported by any valid reference. The authors fail to do the simple measurements or numerical evaluation that would have readily falsified the hypothesis. Nevertheless, they find themselves qualified to apply this questionable hypothesis not only to the particular active electrode evaluated in the paper, but to the active electrode design in general. In effect, they disqualify all active electrodes, including the successful BioSemi design, and confuse the scientific discussion about the merits of the active electrode principle. It is peculiar to see that such an unjustified accusation, that may affect legitimate manufactures who put a lot of effort in improving EEG acquisition systems, can make it through the review process of Journal of Neuroscience Methods.